[su_row]
[su_column size=”3/5″]
World Mental Health Day (10 October) is a day for global mental health education, awareness and advocacy. It was first celebrated in 1992 at the initiative of the World Federation for Mental Health, a global mental health organization with members and contacts in more than 150 countries. This day, each October thousands of supporters come to celebrate this annual awareness program to bring attention to Mental Illness and its major effects on peoples’ life worldwide. In some countries this day is part of the larger Mental Illness Awareness Week.

The terms schizophrenia was coined by Swiss psychiatrist Eugen Bleulerin 1911. Bleuler was also the first to describe the symptoms as “positive” or “negative”.
The word schizophrenia comes from the Greek roots schizo (split) andphrene (mind) to describe the fragmented thinking of people with the disorder.

Mental Illness has been shrouded in stigma, ignorance and superstition since a long time in India. Instead of offering help to the mentally ill, most of us treat them with suspicion, ignorance or cold-hearted apathy. Mental Illness is rising at epidemic rates around the world, including India. WHO predicts that 20% of India’s population will suffer from some form of mental illness by the year 2020. We are woefully under-equipped to handle mental health issues on such a large scale. Currently, we have only 3,500 psychiatrists for the 20 million Indians suffering from mental illness. This means that there is one psychiatrist for more than ten thousand people; which is not even a proverbial drop in the ocean.
[/su_column]
[su_column size=”2/5″]
[jcolumns][jbutton color=”orange” square=”yes” size=”medium” link=”http://utkalsevaksamaj.org/?p=171″]
Donate Now[/jbutton] 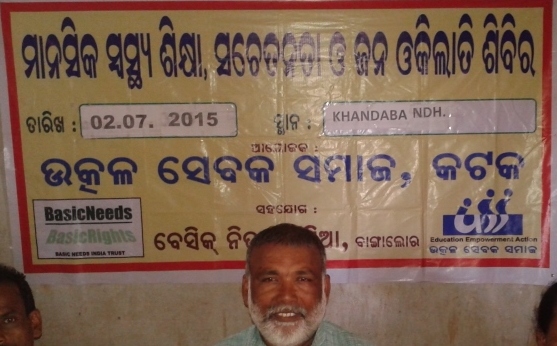 Slowly but surely awareness regarding mental health issues is rising along with acceptance of mental health professionals. A greater number of people are willing to reach out to a mental health professional for a myriad range of problems – ranging from psychosis to emotional disturbances and life- adjustment issues. Medical advancements over the years ensure that the best treatment options are available to the mentally ill. The revised mental health bill has also been presented this year to the Rajya Sabha. This bill has much-awaited revisions with the aim of engendering a greater sense of dignity, rights and assistance to the mentally ill of our country. Many organizations have taken over the mantle of spreading awareness about mental health all over the country. That being said, there is a lot that needs to be done.

Keeping in mind the paucity of trained mental health professionals, the need of the hour is for all our resources to come together. We need a dual approach that encompasses preventive and curative aspects of mental health and the only way to achieve this is through a partnership of the private and public sector. NGO’s, mental health professionals and the government need to join hands in reaching out the community and making a difference right from the grass-root level. Besides spreading awareness and reducing stigma associated with mental illness, we also need to focus on expanding the reach of mental health services to those who need them. The only way of making this happen is to take responsibility and do our bit, together.

10th October is observed as World Mental Health day by the WHO, with the aim of spreading awareness about mental health issues all over the world. The theme for this year is ‘Living with Schizophrenia”. Schizophrenia affects around 26 million people across the world and is the focus of World Mental Health Day this year.
Despite being a treatable disorder, more than 50% of people with schizophrenia cannot access adequate treatment, and 90% of people with untreated schizophrenia live in the developing world.

We want to ensure that people with schizophrenia get the best possible care and support to manage their illness and to help them recover.

WHAT IS SCHIZOPHRENIA?
Schizophrenia affects how a person thinks, feels, and acts but it’s actually a word that describes a number of symptoms that psychiatry has labelled a disorder. Not everyone with schizophrenia has the same symptoms and the definition of the disorder is wide, including a number of combinations of different things.
Schizophrenia may make it hard for people to judge reality and key features of early psychosis include:

• Sleep disturbance
• Appetite disturbance
• Marked unusual behavior
• Feelings that are flat or seem inconsistent to others
• Speech that is difficult to follow
• Marked preoccupation with unusual ideas
• Ideas of reference – thinking unrelated things have a special meaning, ie people on television talking to you
• Persistent feelings of unreality
• Changes in the way things appear, sound or smell.

Schizophrenia can occur in anyone but it’s a treatable disorder. Long term medication may be necessary for some people but talking therapies and self-help groups can also be effective.
The longer an illness is left untreated, the greater the disruption to the person’s ability to study, works, make friends and interact comfortably with others. A combination of treatments is best for individuals with schizophrenia. Medication is the mainstay of treatment. Used to minimize hallucinations, help the individual think more clearly, focus on reality and sleep better. We hope to increase both awareness and sensitivity about person and the difficulties they face. The one thing we seem to lack as a community today is empathy. This World Mental Health Day, let us just take some time out; to think, to feel and most importantly – to care.

We can keep following tips to help people with schizophrenia.

[su_accordion]
[su_spoiler title=”1. The closest family member or friend should speak-up and be an advocate for the person with schizophrenia” open=”yes”]

Sometimes only the family or others close to the person with schizophrenia will be aware of strange behavior or ideas that the person has expressed. Since patients may not volunteer such information during an examination, family members or friends should ask to speak with the person evaluating the patient so that all relevant information can be taken into account [/su_spoiler]
[su_spoiler title=”Ensure ongoing compliance with treatment, especially when released from inpatient care”]

Ensuring that a person with schizophrenia continues to get treatment after hospitalization is also important. A patient may discontinue medications or stop going for follow-up treatment, often leading to a return of psychotic symptoms [/su_spoiler]
[su_spoiler title=”Offer strong emotional encouragement and support for continuing treatment”]
Encouraging the person to continue treatment and assisting him or her in the treatment process can positively influence recovery. Without treatment, some people with schizophrenia become so psychotic and disorganized that they cannot care for their basic needs, such as food, clothing and shelter. All too often, people with severe mental illnesses such as schizophrenia end up on the streets or in jails, where they rarely receive the kinds of treatment they need [/su_spoiler]
[su_spoiler title=”Know how to respond to bizarre statements or beliefs”]

Those close to people with schizophrenia are often unsure of how to respond when patients make statements that seem strange or are clearly false. For the individual with schizophrenia, the bizarre beliefs or hallucinations seem quite real — they are not just “imaginary fantasies.” Instead of “going along with” a person’s delusions, family members or friends can tell the person that they do not see things the same way or do not agree with his or her conclusions, while acknowledging that things may appear otherwise to the patient.
It is very important not to challenge the person’s beliefs or delusions. They are very “real” to the person who experiences them, and there’s little point in arguing with them about the delusions or false beliefs. Instead, move the conversation along to areas or topics where you both agree upon
[/su_spoiler]
[su_spoiler title=”Keep a record”]
It may also be useful for those who know the person with schizophrenia well to keep a record of what types of symptoms have appeared, what medications (including dosage) have been taken, and what effects various treatments have had. By knowing what symptoms have been present before, family members may know better what to look for in the future. Families may even be able to identify some “early warning signs” of potential relapses, such as increased withdrawal or changes in sleep patterns, even better and earlier than the patients themselves. Thus, return of psychosis may be detected early and treatment may prevent a full-blown relapse. Also, by knowing which medications have helped and which have caused troublesome side effects in the past, the family can help those treating the patient to find the best treatment more quickly
[/su_spoiler]
[su_spoiler title=”Help the person set attainable, simple goals in his or her life”]
In addition to involvement in seeking help, family, friends and peer groups can provide support and encourage the person with schizophrenia to regain his or her abilities. It is important that goals be attainable, since a patient who feels pressured or repeatedly criticized by others will probably experience stress that may lead to a worsening of symptoms. Like anyone else, people with schizophrenia need to know when they are doing things right. A positive approach may be helpful and perhaps more effective in the long run than criticism. This advice applies to everyone who interacts with the person
[/su_spoiler]